An air quality index (AQI) is used by government agencies to communicate to the public how polluted the air currently is or how polluted it is forecast to become. Public health risks increase as the AQI rises. Different countries have their own air quality indices, corresponding to different national air quality standards. 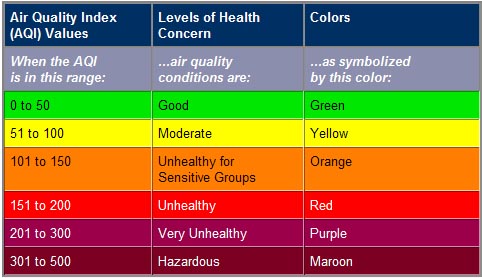 The AQI can increase due to an increase of air emissions (for example, during rush hour traffic or when there is an upwind forest fire) or from a lack of dilution of air pollutants. Stagnant air, often caused by an anticyclone, temperature inversion, or low wind speeds lets air pollution remain in a local area, leading to high concentrations of pollutants, chemical reactions between air contaminants and hazy conditions.

On a day when the AQI is predicted to be elevated due to fine particle pollution, an agency or public health organization might:

During a period of very poor air quality, such as an air pollution episode, when the AQI indicates that acute exposure may cause significant harm to the public health, agencies may invoke emergency plans that allow them to order major emitters (such as coal burning industries) to curtail emissions until the hazardous conditions abate.

Most air contaminants do not have an associated AQI. Many countries monitor ground-level ozone, particulates, sulfur dioxide, carbon monoxide and nitrogen dioxide, and calculate air quality indices for these pollutants.

So, when you round trip in Vietnam, you need to find air quality to ensuring health.