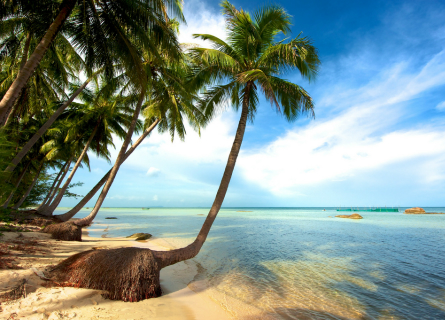 Packed with lakes, temples and pagodas, Hanoi is a welcoming city that manages to combine a charming mix of old with new. Heavily bombed during the Vietnam War, today the country’s capital city is fast moving forward into the 21st century but in areas such as the Old Quarter life has changed very little over the centuries for its residents. From Hanoi we will travel out to Ha Long Bay to cruise its emerald waters and explore some of the 3,000+ islets and grottoes that make up this magnificent UNESCO World Heritage site. After spending two nights onboard our junk on Ha Long Bay we will drive back to Hanoi to fly to Da Nang and drive to the sandy beach resort in Hoi An – a destination with two faces offering a nice balance of history and leisure for your Vietnam tour. The charming, old-world trading port town features narrow streets and traditional houses which now host a range of craft shops and artisans, including some of Asia’s best bespoke tailors. You will have three days at your leisure to relax palm-fringed white sand beaches and discover Hoi An. Leave the hectic pace of Ho Chi Minh City behind with only one-hour flight to Phu Quoc Island. Blessed with favorably natural environment like the virgin forest of over 37,000 hectares, white sandy beaches, coral gardens offshore, different varieties of wildlife species. Spend three days relaxing, letting your days unfold naturally as you slip into the steady rhythms of laid-back beach life. Phu Quoc’s palm-fringed, white sand beach and warm waters are the perfect setting for culminating a Vietnam tour. 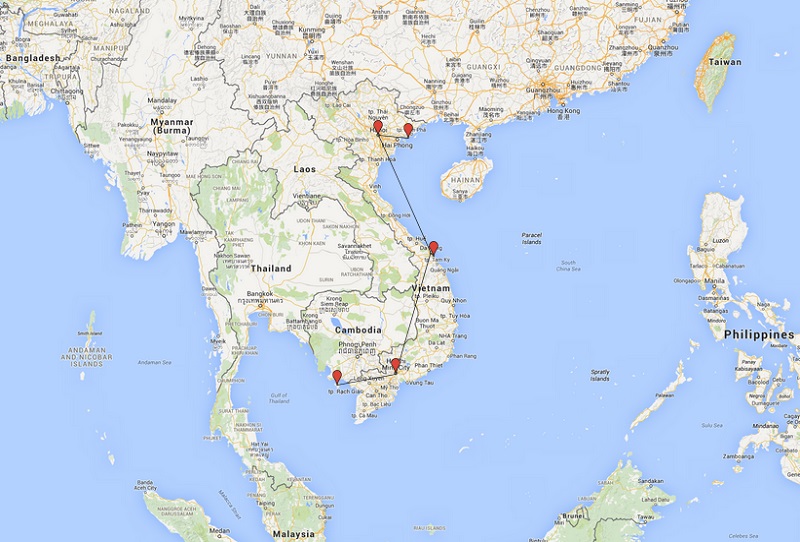 Upon arrival in Hanoi we transfer you to your hotel. Although there has been a permanent settlement here since the 3rd Century AD, the city of Hanoi can trace its origins back to 1010 B.C., when Emperor Le Thai To moved his capital from Hoa Lu to this site. When the French occupied Vietnam from the 1880s to World War II, Hanoi was developed as their colonial Indochinese capital with many of the ancient and historical structures being razed to make way for new French buildings. Today, the people of Hanoi take a lot of pride in their grand old colonial buildings which, together with the wide spacious boulevards and tree-lined lakes, help make Hanoi one of most graceful and charming cities in South East Asia.

In the afternoon you enjoy a walking tour in the Old Quarter well-known as 36 Old Streets Quarter included of visiting Old Traditional House on Ma May street, Ngoc Son temple and Hoan Kiem lake. Afterwards you experience an hour on a cyclo ride around the old quarter and enjoy the puppet show at the water puppetry theatre.

Overnight in HANOI. Accommodation is included in this package.

Halong Bay became firmly entrenched as one of the must-sees of Vietnam after the filming of the 1992 French movie, Indochine (starring Catherine Deneuve) and later the 1997 James Bond film Tomorrow Never Dies (starring Pierce Brosnan), The images of red sailed junks navigating through the 3,000+ limestone karsts (islands) jutting out of the bay are nothing short of spectacular. It is approximately a three-hour drive from Hanoi to Halong port, passing the Red River and the country side of the delta. Upon arrival embark the Phoenix Luxury Cruiser and sip on a welcome drink before checking in your cabin then begin the cruise through the bay.

A delicious lunch would be served while you are cruising among hundreds of islands and gorgeously natural settings, limestone bedrocks and sheer cliffs of tiny islets. You will pass by Duck and Thumb islets, then Coconut Island – the only soil island in the World Heritage Site.

When the boat stops at Luom Bo area, you will kayak in the turquoise waters of Cat Ba National Park and it is optional to swim on the sandy beach of the Coconut Island. As the sun sets, relax and enjoy our happy hour as we keep cruising to Fairy Lake (Ho Dong Tien) area and anchor for the night.

Overnight on the BOAT. Accommodation is included in this package.

Early rise for the stunning vista of the serene bay, experience some relaxing Tai Chi on the upper deck, and enjoy an oasis of calm in Halong Bay with no distractions of worldly concerns. Today, you will kayak in Ba Trai Dao and Ho Ba Ham areas (Lan Ha Bay).Leave Phoenix Luxury on a kayak support-boat to cruise down to the Southern of Halong Bay, we pass by the famous Frog and Chop Stick Islands then start paddling around 10 am. The guided round trip lead you to different corners of Lan Ha Bay, pass by several beaches and lagoons. After paddling for about 2 hours, we break on a private beach, swim and relax before lunch.

Crossing the channel to another kayaking area – Ho Ba Ham where you will kayak for 2 more hours. The quiet atmosphere and the beautifully calm waters of this area are truly rewarding for both kayak and nature lovers.

In the later afternoon, we are passing Cua Van floating village on our way cruising back to the overnight boat. Arrive at Phoenix Luxury around 5:30 pm, you can now treat yourself a beer or a cold drink after a stretched-arms-day.

Overnight on the BOAT. Accommodation is included in this package.

You would love to get up early to practice your Tai Chi and enjoy beautiful morning of Ho Dong Tien again. This morning you will visit the most imposing grottos of the bay – Surprising (Sung Sot) Cave.

On our way back, you would have a wholesome lunch as the boat weaves through strange-shaped rock formation, passing by famous islands highlighted with fanciful names: Fighting Cocks (symbol of Halong Bay), Incense Burner, and Stone Dogs.

Arrive back at the Tuan Chau International Marina, you meet your guide and driver again to take you straight to Hanoi airport for the flight to Danang. Upon arrival we drive about 45 minutes to a beach hotel in Hoi An – passing the massive former US airbase that was, in 1968, the busiest airport in the world with all manner of aircraft coming and going in support of South Vietnam’s war effort. The ancient and historic town of Hoi An was for three centuries one of the most important ports in Central Vietnam, visited by sailing ships from all over the world seeking trade in silk, ceramics and, spices. In the late 19th Century, the Tu Bon River, linking the port to the open sea, began to silt up and became un-navigable for large vessels. Trade moved up the coast to Tourane, now modern day Danang, and Hoi An went back to being a sleepy little fishing and rice farming community. Today however, Hoi An’s fortunes are once again riding on the crest of the wave as Vietnam’s number one tourist destination. This is largely due to the fact that UNESCO has listed the Old Town as a World Heritage Site with its quaint narrow streets packed with ancient Chinese, Portuguese and Japanese styles of architecture that has changed little from its heydays as a major port of trade.

Overnight in HOI AN. Accommodation is included in this package.

These days are free at leisure. In your free time you can rent bicycles and set off to explore the surrounding countryside, take a boat trip on the Tu Bon River, relax on the nearby beach, enjoy the wonderful cuisine on offer at some of the town’s numerous cheap cafes, or have some clothes made up. Hoi An has nearly 100 silk shops offering same-day service for tailor made clothes at low prices.

Overnight in HOI AN. Accommodation is included in this package.

Free at leisure until we transfer you to the airport for the flight to Saigon. Upon arrival we transfer you to the hotel. Officially renamed Ho Chi Minh City after reunification in 1975, most people here still prefer to use the old name, Saigon. Once referred to as the ‘Pearl of the Orient’, Saigon, with its unofficial population around 8-9 million is Vietnam’s largest city and stands in stark contrast to the capital, Hanoi. Perhaps Saigon lacks the same colonial charm of its northern cousin but it still has a certain tropical ambience and general hustle & bustle that makes it a distinctly a modern South East Asian city.

In the evening you experience the city chaos by taking the Vespa tour. Our first stop is at Café zoom to “watch the world goes by” (quoted by The Lonely Planet) and enjoy cocktail and appetizer (inclusive) before adventuring into favorite local eating spot. Guests experience the nightlife of Saigon the way locals do, all from the back of a vintage Vespa scooter. The tour will start with a ride to part Chinatown and then heading to District 4 through busy streets and alleys to see the night life of locals and enjoy street sea- food and cold drinks, places that foreigner won’t be found. Leaving district 4 to district 3 the tour pass through downtown district 1 to take in the sights on the way to Banh Xeo, specialty of Saigon, and southern food with the locals. Then the tour will continue to a hidden Vietnamese-style coffee shop to have a taste of Vietnamese music (live) as a local. After this the tour will bring guest to a lively bar to enjoy the drinks with live music. Please note drinks are included in the Vespa tour.

Overnight in SAIGON. Accommodation is included in this package.

This morning we drive to pier where you embark on the speedboat to Cu Chi tunnels. Begun by the Viet Minh and later expanded by the Viet Cong, Cu Chi’s tunnels were constructed to conduct covert operations and then quickly hide from the enemy. There are reputed to be around 200 kilometers of underground tunnels within the area, and in some places they even managed to penetrate the perimeters of nearby US military bases. We will actually be given the opportunity of crawling through a section of the tunnels while we’re here, and learn how the brave men and women of Cu Chi built underground hospitals, kitchens and meeting rooms during their struggle for a unified Vietnam. Please note soft drink, fruit and lunch served during the trip on the boat.

Overnight in SAIGON. Accommodation is included in this package.

We are free at leisure until we transfer you to the airport for the flight to Phu Quoc. Upon arrival we transfer you to the hotel for your 3 nights in Phu Quoc Island. Ringed with some beautiful beaches in Vietnam, and offering the best seafood in the country. Phú Quôc is still what Phuket would be, if it had not been overrun by development. Phuquoc island and its beaches were voted to be “The Cleanest and Most Beautiful Beach of the World” by ABC News as from the end of February, 2008.

Overnight on PHU QUOC. Accommodation is included in this package.

Free at leisure, it is subject to your flight schedule you might have some free time once we transfer you to the airport for taking the flight to Saigon airport for connecting with your international flight back home. Today is the last day of your tour. You can use your hotel room in Phu Quoc until check out time (most times at 12 pm noon). We wish you a comfortable journey home and we are sure you will take some wonderful memories of Vietnam with you.

When booking your tour, please check to see whether you need any post-tour nights, bearing in mind that accommodation for the night of the final day of the tour (Day 12) is not included.

* Hotel check-out times are midday. Late check-out is not included. 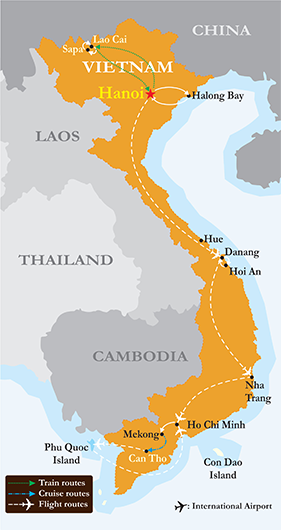